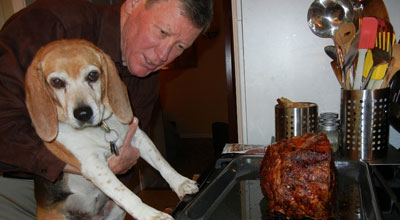 Daisy has always been eccentric. The first time I saw her scrimmaging with her littermates, she was pushy and aggressive, and I couldn’t resist her.  Upon arrival at her new home she quickly laid down the ground rules for Barclay, the resident 3-year-old beagle. He didn’t care, muttered, “Yeah, whatever,” and resumed his afternoon nap. 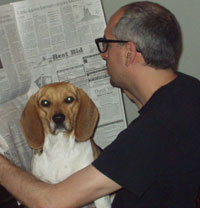 Daisy’s social neuroses showed up the first time we took her to a dog park. She climbed our legs in terror, and our attempts to socialize her were ineffectual. Now in her 12th year, she is more relaxed around other dogs, and she shows her gregarious side at the Beagle Meet-Up we attend every month.

That’s one of the changes we have seen in Daisy as she ages. Another is that she sleeps more. I think her hearing has begun to fade, and it was to that I attributed her occasional aggression toward our other two beagles. 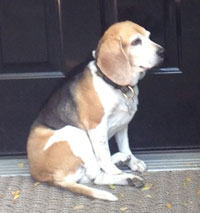 With no apparent provocation she snaps at them, then a moment later apologizes by licking eyes and ears and cuddling close to her favorite, Chauncey.

Other behaviors are showing up now. She scratches at the hinge side of the door to come in, even though she knows very well how the door has always opened. Or she wanders around the house as if she has forgotten what she was looking for. But then again, I do that myself sometimes!

Our little Daisy has been a goofy, bossy, and lovable girl whom we continue to cherish. We allow for the little spats and her forgetfulness, just as we accommodate and care for all the treasures we grow old with.