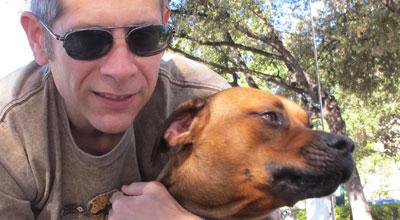 We met up in Marathon, Texas. I had cycled there from Corpus Christi, and my brother from San Diego, California. It was March, 2012, and the dreadful heat of the summer was still weeks away. That did not make our bike trip back to Corpus any cooler. Through Sanderson, Comstock, and Del Rio, the sun bore down in unrelenting tones of yellow.

We were on Highway 90, the southerly route trekkers use to cross the U.S. on bicycles. My brother was hauling his dog Raisin in a burley attached to the rear of his bike, and 25 miles outside of Uvalde, Raisin started barking. My brother spotted two puppies ducking under some high weeds that served as a poor shelter against the sun. One, a white and black-splotched creature, stepped forward and barked. The other, light brown, cowered behind. My brother fed food scraps to the starving puppies, and we got them into the burley.

Over the next few miles, the pups vomited and lay in the burley, exhausted. Raisin, herself a rescue, seemed to understand what was happening and tolerated their misery. We stopped intermittently and took turns removing clusters of ticks that obscured entire areas of the puppies’ ears, necks, and feet.

In Uvalde, the hotels we checked refused to accept dogs. When it looked as if we’d be crashing at a local park, a man introduced himself. He and his wife opened their home to us—strangers both. We and the puppies slept soundly. The next morning we bought food for the pups, bathed them, removed more ticks, and the effect was dramatic.

Over the next few months, I taught Spot and Sandy their new names, took them to the clinic for the usual round of shots, and escorted them on daily walks through the neighborhood. They loved running along the beaches and sniffing out the sundry odors thereabouts. 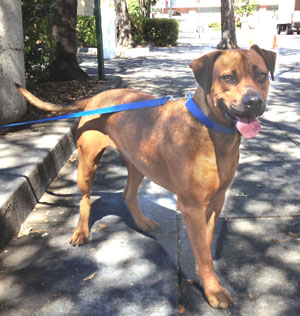 Other walkers and runners became familiar with our rounds, and Spot and Sandy enjoyed a reputation as two of the friendliest puppies on the block. No one would have guessed the trauma of their early months.

Eventually, I moved back to the Palo Alto area, and about three months ago I drove Sandy the 2,000 miles from south Texas to California. He enjoys his new home and meets and plays with the neighborhood dogs at a local park. He is also a regular among the dogs who visit the downtown Farmer’s Market.