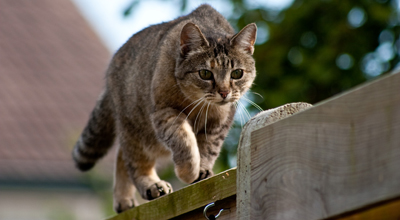 How to keep your feline friend safe in 2013

Sometimes it seems like cats can defy the laws of physics. They have a keen sense of balance and nearly always land squarely on their feet, which contributes to the “nine lives” myth. But cats also have a keen sense of curiosity, which can lead them into precarious and sometimes dangerous situations. Nearly 10 percent of the calls to Pet Poison Helpline in 2012 were for potentially poisoned cats  . A vast number of these cats live indoors, indicating that many cat owners are still unaware that certain items and plants lurking in their homes can be deadly to their beloved companions.

“One of a feline’s favorite pastimes is eating grass outdoors,” said Dr. Justine Lee, DVM, DACVECC, DABT and associate director of veterinary services at Pet Poison Helpline. “Indoor cats without access to grass can resort to nibbling on indoor plants, some of which can be very poisonous. Cats’ inquisitive nature, as well as their obsession with cleanliness, can also get them into trouble if they’ve made contact with a toxic substance on their coat or paws. The simple act of grooming pollen off fur after brushing up against certain types of lilies can cause severe acute kidney failure. You can avoid emergency trips to the veterinarian by understanding what items are poisonous, and keeping your beloved feline companion a safe distance away.”

Of the thousands of calls that came into Pet Poison Helpline from cat owners and veterinarians treating cats in 2012, here are the top five most common toxins that caused emergencies:

If a cat ingests any of these things, immediate veterinary care is advised. The veterinary toxicologists at Pet Poison Helpline provide the following guidance to cat owners, including steps that can be taken to protect cats, and symptoms to watch for if cats are exposed.

Concentrated topical flea and tick medications made for dogs contain pyrethrins or pyrethroids, which are highly toxic to cats. Poisoning in cats can occur when pet owners apply dog insecticides to their cats, or when cats lick the medications off dogs. Cats can suffer severe drooling, tremors and life-threatening seizures. Always read labels carefully before using any kind of insecticide on pets and ensure it’s intended for the species you are treating.

Some common household cleaners like toilet bowl cleaners, rust removers, and drain cleaners can be toxic to cats. If ingested, cats can suffer profuse drooling, difficulty breathing, vomiting, and chemical burns to the mouth and esophagus. Be sure to store these products out of cats’ reach at all times. Also, after using these products, make sure all excess liquid or residue is wiped up and dried prior to allowing your cat back into the cleaned areas.

Common antidepressants such as Prozac, Zoloft, Effexor and Cymbalta can be poisonous to cats.Cats are drawn to certain antidepressants more than others, particularly Effexor, which contains a smell and flavor that is seemingly appealing to cats. If ingested, symptoms can include anorexia, lethargy, vomiting, tremors, seizures, hyperthermia, and diarrhea. While antidepressants are sometimes used in veterinary medicine to treat behavioral problems, caution should be taken, as even therapeutic doses moderate to severe clinical signs can occur.

Of all plants, lilies are the most deadly to cats. The species to watch for are the common ones – Tiger, Day, Asiatic, Easter and Japanese Show (Lilium and Hemerocallis spp.). Florists often include them in arrangements because they are fragrant, inexpensive and long-lasting. Very small ingestions of two or three petals or leaves – or even pollen licked off a cat’s coat – can result in severe, potentially irreversible kidney failure. Other “lilies,” such as Peace, Peruvian and Calla, are not true lilies and cause only minor symptoms in cats. Examples of additional household plants dangerous to cats are the cyclamen, Kalanchoe species, Dieffenbachia species, daffodils and Lily of the Valley.

Non-steroidal anti-inflammatories (NSAIDS) can be fatal to cats because they have difficulty metabolizing the drugs. This includes common over-the-counter NSAIDS such as aspirin, naproxen, and ibuprofen. If ingested, NSAIDS can result in severe kidney failure and stomach ulcers. Another common pain medication, acetaminophen, can also be dangerous. In fact, one tablet can be fatal to a cat. If untreated, ingestion can cause severe anemia, difficulty breathing, a swollen face, liver failure and sometimes death.

Keep your feline friends safe by protecting them from these toxins in 2013. If, however, you think a pet may have ingested something harmful, take action immediately. Contact your veterinarian or Pet Poison Helpline at 1-800-213-6680. Pet Poison Helpline also has an iPhone application with an extensive database of over 200 poisons dangerous to cats and dogs. “Pet Poison Help” is available on iTunes for $1.99.