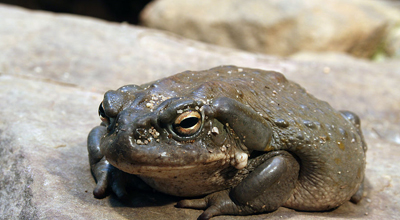 It’s spring and many pet owners are itching to spend quality time outdoors with their pets. While run-ins with poisonous creatures can be infrequent, pets are curious and it’s not uncommon for them to investigate other living things that move. These “interrogations” can quickly escalate into deadly situations when dealing with a creature that protects itself with venom.

More than any other time of year, the spring and summer months are when Pet Poison Helpline receives more calls from pet owners and veterinarians concerning pets that have been poisoned by venom. When encountered by a venomous creature, pet owner knowledge and awareness is the best defense. For this reason, the veterinarians and toxicology experts at Pet Poison Helpline suggest that pet owners arm themselves with this list of the most common venomous creatures in North America. Several species of snakes are venomous and extremely dangerous to pets. Coral snakes(family Elapidae), commonly found in the Southeastern United States, are very poisonous to all pets and farm animals. The saying “red next to black is a friend of Jack; red next to yellow is a dangerous fellow,” applies to their colorful ringed bands. Coral snake venom contains neurotoxins that can cause respiratory failure and muscle paralysis. Symptoms are acute paralysis (not being able to move or walk), problems breathing, and sometimes collapsing. Treatment typically includes supportive measures, particularly respiratory. Anti-venom is effective, but not readily available. Rattlesnakes (family Viperidae) are most common in the Southeast and Southwest, but can be found in nearly all areas of the country.  Pit vipers (subfamily Crotalinae) and are generally considered to be the most dangerous, followed by cottonmouths (Agkistrodon piscivorus, a.k.a. water moccasins), and copperheads (Agkistrodon contortrix). Rattlesnake bites are poisonous to all pets and farm animals. Symptoms of envenomation include difficulty breathing, bruising, cardiovascular shock, and in serious cases, organ failure. Treatment often includes intravenous fluids, antibiotics, transfusions, anti-venom and blood parameter monitoring.

Something to keep in mind is that about 25 percent of rattlesnake bites are “dry,” meaning that venom is not released, but immediate veterinary attention is always recommended. For toads, the two primary species of concern are the Colorado River toad (Incilius alvarius)and the marine toad (Rhinella marinus). Typically found in warm, tropical areas like Arizona, California, Florida, Texas, Hawaii, they are poisonous to cats and dogs. The Marine toad is considered to be the most toxic, and most dogs poisoned by them will die if untreated. Even just mouthing or holding the toad in the mouth, or drinking water from a container where the toad was laying, can result in severe poisoning. Symptoms can include severe drooling, followed by difficulty breathing, incoordination, seizures, abnormal heart rhythms, and even death. Treatment includes flushing of the mouth, medication to treat abnormal heart rates, blood pressure monitoring, and supportive care. There are more than 1,500 species of scorpionsthroughout the world, but the Arizona bark scorpion (Centruroides sculpturatus) is the only species considered significantly venomous in North America. Common in the Southwest (primarily Arizona and New Mexico), it’s about 7 to 8 cm long, light brown to gold in color, and nocturnal. When dogs or cats are stung, symptoms may include drooling, itchiness, hyperactivity, seizures, abnormal eye movement, tremors, and walking in a drunk-like state. Immediate veterinary attention is recommended for pain medication, anti-venom intravenous fluids, and supportive care. Most spiders are minimally venomous, but the female black widow (Lactrodectus) is poisonous to dogs and cats because of its large fang structure. Found throughout North America, female black widows are 2 to 2.5 cm in length, shiny and black with orange or red hour glass shaped markings on their underside. Males, generally considered non-toxic, are smaller, can be black or brown, and lack the characteristic abdominal markings. When bitten by a female black widow, dogs, and especially cats, may show signs of severe muscle pain, cramping and muscle rigidity, incoordination, tremors, paralysis, blood pressure changes, drooling, vomiting and diarrhea, and respiratory paralysis sometimes leading to death. Veterinary treatment includes the use of an anti-venom, muscle relaxants, intravenous fluids, anti-seizure medications, pain medications and symptomatic supportive care. The brown recluse spider (Loxosceles reclusa)is found across the southern region of the United States. Measuring between 8 and 13 mm in length, it has long legs, ranges in shades of brown, and a violin shape on its upper body (dorsal cephalothorax). Its venom is a mix of phospholipases and proteases, which can result in severe tissue damage at the bite locations. However, there is tremendous variability of the potency and quantity of venom injected with a bite. Animals bitten may show clinical signs of vomiting, fever, lethargy, bleeding/bruising, organ damage to the liver and kidneys, severe chronic skin lesions, bleeding/bruising, organ damage to the liver and kidneys, which can lead to death. Unfortunately, no anti-venom is available for this spider. Immediate veterinary attention is always recommended, and strong supportive care measures may be needed, including wound care.

While enjoying the outdoors this spring and summer, be aware of venomous creatures native to your area and keep your pets a safe distance away. Simply keeping your dog on a leash – or your cat indoors – can minimize the chance of your pet suffering the consequences of an unfortunate encounter with a venomous creature. If your pet comes into contact with one of them, take action immediately. Contact a veterinarian or Pet Poison Helpline at 1-800-213-6680. Pet Poison Helpline is the most cost-effective animal poison control center in North America charging only $39 per call, including unlimited follow-up consultations. Pet Poison Helpline also has an iPhone application listing an extensive database of over 200 poisons dangerous to cats and dogs. “Pet Poison Help” is available on iTunes for $1.99.