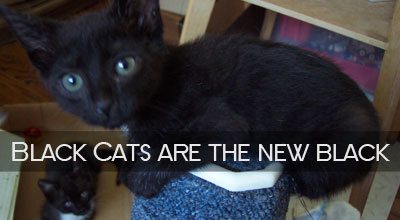 There’s a life-threatening plague sweeping the nation this very moment: the Black Cat Syndrome. It’s causing humans the deprivation of cuddly companions and is even more life-threatening to the furry felines.

Mischievous misconceptions concerning not only black cats, but black animals in general, are actually causing the deaths of many healthy shelter animals. On the bottom of adoption lists, and thus on the top of the euthanasia lists of overcrowded shelters, are black cats. But what ridiculous rumors are preventing these black beauties from attracting prospective adopters who are looking for a loving friend? And do these rumors have any ground? 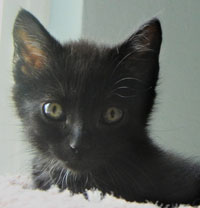 The old saying that a black cat crossing your path bodes bad luck is actually not that old at all. It’s only about as old as the United States, which, compared to other civilizations, is relatively young. In fact, in almost every other country, there’s an even older saying: black cats bring good luck. The Egyptians, for example, worshipped the black cat goddess Bast. In Europe, a black cat crossing your path bodes well for the fortunate pedestrian, while a black cat walking in to your house is a true blessing. The English believe that black cats bring safe seafaring to fishermen, and 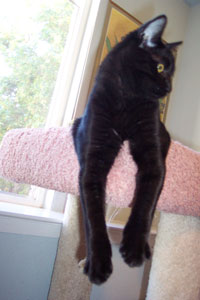 King Charles I’s luck only ran out when his beloved black cat died. In Japan, a black maneki-neko (beckoning cat) signifies good health. Black cats, with their mysterious coloring, only incurred the skepticism of the overcautiously suspicious Pilgrims. They linked black cats with witches, not unlike the black silhouettes on the back of witches’ broomsticks we picture today. But just because the silhouette is black, who’s to say that the cat is black as well? It could be a tabby cat, or a calico cat, or even a pearl-white cat perched on that stick, for all we know. All their silhouettes look exactly the same. And as for cats being associated with witches, I’ve heard many a spell that includes cat’s brains, or cat’s eyes, or cat’s tails; I don’t think cats like being around witches and their cauldrons more than anybody else. 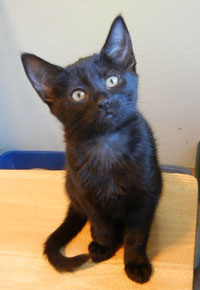 But aside from silly superstitions, there are other misconceptions haunting black cats. Perhaps due to the common image of black silhouettes of cats slinking around in the dead of night (again, a black silhouette does not always translate into a black cat), people often view black cats as shy, and prone to aggression (thanks to plastic black cats with raised hackles decorating trick-or-treaters’ yards). Almost one fourth of the 167 cats I have fostered have been black cats, and I can vouch for every single one of them. Although black cats, like any other cat, can start out shy when first rescued, the black cats I have known have been especially resilient. In fact, I would readily argue that black cats are the second most friendly type of cats (behind the widely accepted friendly orange tabby). That’s not to say that only black cats are friendly; but I have found that, generally speaking, black cats make great family pets. They seem to be particularly gentle with younger children, and are often affectionate lap cats with rumbling purrs. They certainly aren’t more prone to shyness or aggression than any other cat with any random fur coloring. Black cats are as fun-loving and friendly as any other cat, if not more so. On top of all that, scientists have found that the gene pattern related to black coloring might be linked to resistance to pathogens. So, black cats are healthier cats! 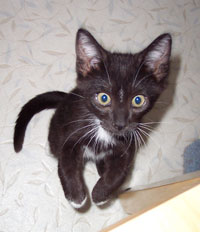 Another aspect that deters prospective adopters away from black cats is poor advertising photos. Black cats can be hard to photograph because they do blend into shadows, and their cute facial features are often lost due to lack of color variation and contrast. This problem, however, has an easy fix. As a shelter cat photographer, positioning the cat against a light background and allowing in lots of natural light highlights the glossy sheen of their alluringly ebony coats, while also allowing for some contrast that brings out their adorable faces. (If you’re an avid photographer with a high-quality camera and some spare 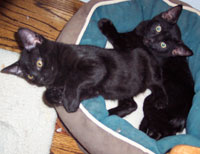 time, consider volunteering at your local animal shelter and help some black cats attract loving forever homes!) As a prospective adopter, realizing this little difficulty when browsing through online photos can help you keep an open mind. Try not to judge the cat solely on the picture (it’s not their fault the photographer didn’t ask for their good side!), but rather on their written personality biographies. Better yet, go to the shelter and see how cute black cats are in person. 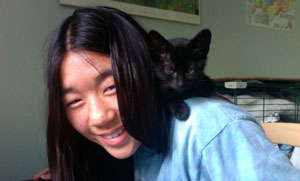 With Halloween coming up, black cats are especially vulnerable. Some organizations even stop adopting out black cats during October, for fear of people buying them just to set them lose on Halloween to scare young trick-or-treaters. Please be considerate during Halloween festivities: try to refrain from scary black cat decorations (stick with ginormous spiders — they’re actually scary!), and please keep your black cat indoors on Halloween if you don’t already always keep your cat within the safety of your home.

And if you’re looking for an enthralling, exemplary, elegant furry friend to brighten up your home, please consider an ebony cat! (Click here to see ebony cats up for adoption at PAAS!)

About the Author
Joanna Tang, our Youth Board Liaison from Gunn High Scool